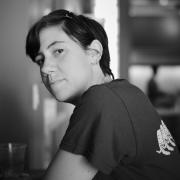 Vyki is a software developer, cartographer, and cyclist who fell in love with Los Angeles after landing in downtown in 2012. Raised in a college town on the east coast, she was introduced to advocacy early and has found herself pushing for change in a world that often shies away from progress.

Vyki helped launch the city of Santa Monica's open data initiative by publishing the city's first datasets online, as well as launching new websites tailored toward engaging the public in the city's planning and development processes.

Currently Vyki serves as a member of the National Advisory Council to Code for America.