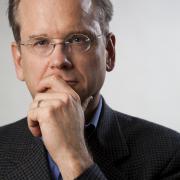 Opening Keynote: Only You Can Get This, So Where Are You?
Roy L. Furman Professor of Law and Leadership
Harvard Law School

Lawrence Lessig is the Roy L. Furman Professor of Law and Leadership at Harvard Law School, director of the Edmond J. Safra Center for Ethics at Harvard University, and founder of Rootstrikers, a network of activists leading the fight against government corruption. He has authored numerous books, including Republic, Lost: How Money Corrupts Our Congress—and a Plan to Stop It, Code and Other Laws of Cyberspace, Free Culture, and Remix.

Lessig serves on the Boards of Creative Commons, AXA Research Fund and iCommons.org, and on the Advisory Boards of the Sunlight Foundation, the Better Future Project, and Democracy Café. He is a Member of the American Academy of Arts and Sciences and the American Philosophical Association, and has received numerous awards, including the Free Software Foundation’s Freedom Award, Fastcase 50 Award and being named one of Scientific American's Top 50 Visionaries.