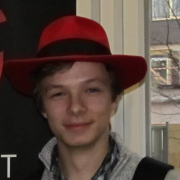 Linux Desktop: When is our year?
imperial College London

Levente is a systems software engineer, currently studying at Imperial College London for his bachelor degree, as well as working on low-level performance of mission critical systems in Chicago. Previously, he interned at Apple and at Red Hat, working on operating systems. An avid computer enthusiast, he created his own UNIX-like operating system kernel from scratch, capable enough to run GCC and various well-known utilities. His other interests include spreading the spirit of the Open Source (Levente serves as a Fedora Ambassador), running, playing squash and tasting tea.