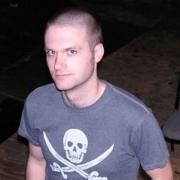 We had a chance to sit down with Kyle Rankin, SCALE 11x keynote speaker, to discuss his upcoming keynote as well as a host of other topics including 3D printing, Linux desktops and whether Jorge Castro is the barometer for cool technology.

Kyle: My name is Kyle and I enjoy long walks on the beach, vi key bindings, and buckling spring keyboards. I started experimenting with Linux in college about 15 years ago and a few years later found out I could get paid for all this Linux work I was doing for fun. On the side I do a fair amount of technical writing including books for Addison Wesley, Prentice Hall, and O'Reilly and a monthly column for Linux Journal. Apart from Linux I also have way too many hobbies including 3D printing; playing the banjo; brewing; smoking and curing meat; plumbing, carpentry, and other home improvement; and maintaining a 1970 Karmann Ghia convertible.

SCALE: What initially drew you to Linux? What was the appeal?

SCALE: What was your first distribution?  First window manager?  What do you think about modern desktop environments?

Kyle: My first distribution was a Red Hat 5.1 floppy install (the first time Red Hat was 5.1). I started out with FVWM95 as a window manager because it was the most like the Windows 95 desktop I came from and shortly afterward switched to Afterstep. The funny thing about modern desktop environments for me is that they all have to start from scratch every couple of years so they almost never get the kind of features (like fine-grained window memory) that I had in window managers 10 years ago. These days all I really need is a few desktops, a terminal or two, and a web browser along with a window manager that lets me put my windows in the same place every time. I tend to launch programs either from a terminal or with gnome-do so menus don't matter much anymore.

SCALE: What was your first Linux job out of college?  How did get that job?

Kyle: My first Linux job I got through an internship program at the college. I started working as a programming intern at Lexmark in the quality assurance department alternating semesters at Lexmark with semesters at school. At first I just did basic grunt work like running print quality tests but eventually I started contributing code to some internal projects including writing GUI software to interface with a spectrophotometer we used for optical density measurements. On the side I helped out with the growing set of Linux servers we were using. Initially these were Samba servers (that was usually how you sneaked Linux into an enterprise back then) but eventually I also set up a Linux-based router to direct traffic between our token ring and Ethernet networks. By my third semester as an intern I realized I liked working on Linux and networking much more than programming and made the decision to be a sysadmin.

SCALE: You're giving a keynote on "Practical 3D Printing and the Open Source Community". Without tipping your hand on the actual talk, can you give us an idea of what we might expect?

Kyle: For starters I want to give anyone who's on the fence about buying a 3D printer (or has someone at home to convince) plenty of examples of useful things they can make for around the house and give a quick primer on the current state of hobbyist 3D printing. Beyond that I want to dig into 3D printing's Open Source roots and draw some parallels between the Linux and 3D printing communities.

SCALE: What direction do you see 3D printing going in the future?

Kyle: Right now 3D printing still requires a minimal level of hardware hacking skills to assemble, calibrate, and maintain the printer and understand how to use the software front-ends. I would liken it to the era when Linux installers had some sort of GUI, but they still required you to manually partition the disk and asked you what desktop environments to install and still required command-line tools to update and manage the system--not something you'd probably subject your parents to.

Now that the cost has started to come down and printers are getting into the hands of people who aren't hardware hackers, we are starting to see more effort in making the whole experience easier for non-geeks both with hardware that is easier to assemble and calibrate and software that figures a lot of the settings out for you. I think the future will bring 3D printers that are cheap enough and easy enough to use that you'll see them for sale next to laser printers in office supply stores. Beyond that I'm really excited to see some of the new resin-based 3D printers come to market.

SCALE: Do you think thats a good thing?  Similar to Linux on the desktop, where things have gotten easier but there is the potential to lose the appreciation of what is happening in the background?  Or is that simply inevitable?  Will 3D printers still appeal to hardcore hackers or will they move onto the next thing?

Kyle: I do think it's a good thing because it takes a more thoughtful engineer to design something that works for people of all experience levels. Take software installation on Linux for instance. Back in the day whenever you wanted to install software you first had to track down all the library dependencies, compile and install them (which meant tracking down their dependencies too), and then finally your configure and make scripts would work and you could compile your new tea timer program. It took some thoughtful engineering (combined with package maintainers that work through the dependencies) but now we have software that performs all of that mundane work of dependency management.

I think even though Linux allows you to use it these days with no idea what's going on behind the scenes, for the most part it still allows you to peek behind the curtain if you are interested. People who are into Linux just to be elitist will still switch from distro to distro just like hipsters switch to a new band when their favorite band gets popular. With 3D printing things are so new that the hard-core hardware hackers are still out there inventing new printers and refining existing designs and I think it will be many years before they get bored. Others will follow behind them and make their work cheaper and easier to use for everyone else.

Kyle: This will be my fourth time at SCALE! SCALE has to be one of my favorite Linux conferences for a number of reasons: there's always a large number of high-quality talks, the "hallway track" is great, plus I love the 30 minute break between presentations that gives people time with the speaker after a talk yet still have time to find the next presentation.

SCALE: What, if anything would you change about SCALE?  How can it be improved?

Kyle: I don't really have any extra suggestions for improvements, just keep doing what you're doing.

SCALE: Any sessions, other than your own, that you're looking forward to seeing?

Kyle: I'm really looking forward to Matthew Garrett's keynote for one. I saw him speak back at LUGRadio Live a few years ago and really enjoyed the talk.

SCALE: Is that because Jorge bribes you? Or does he have some sort of blackmail material on you?

Kyle: I like going to Jorge's talks because I like to know what software I'll be using a few years from now. Every single time he comes to me excited about a new technology I dismiss it completely. Then a few years later I find myself using it and a year or two after that I'm evangelizing it myself.

SCALE: So Jorge is some sort of human barometer for cool technology? How soon before we see him on cable TV wearing a fennel wreath and paper pants?

Kyle: He's kind of like an Open Source Billy Mays...

Kyle: It's fine if you play Angry Birds during my talk, but please remember to mute the audio.