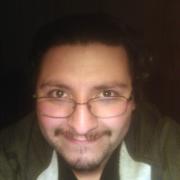 We had a chance to sit down with Guillermo Antonio Amaral Bastidas, SCALE 11x speaker and exhibitor, and discuss some of the exciting projects he's been working on. Guillermo will be speaking about his free & open source video game system, as well as showing it off in his exhibitor booth.

Guillermo: My name is Guillermo Amaral, better known as *gamaral* in many open-source circles. I guess you could say I'm a self-thought software engineer with a knack for adventure; That is of course, if your definition of adventure is me spent most of my time toiling over books and experimenting on unsuspecting electronics.

SCALE: You're giving a talk on "Open-Source Retro Video Game Console".  Without tipping your hand on the actual talk, can you give us an idea of what we might expect?

Guillermo: A fun filled adventure into one mans psyche... That or a live demo of my Linux powered game console prototype; complete with a game that will illustrate, and with any luck explain, the many different components of the system.

SCALE: Ah the infamous live demo.  What inspired you to create a Linux powered game console?  And why retro games?

Guillermo: I've always wanted to create a game console that others could build and use without needing to become an electrical engineers or break the bank. Recently, technology got to the point that it became a real possibility. I went with retro games since that's what I grew up with, no 3D, no fancy graphics, just plain old pixelated fun; granted the consoles game engine could be used for any 2D game, not just retro style ones.

Guillermo: SCALE is unlike any other Linux event I've attended, it's extremely easy to just wonder the expo hall for an hour and walk out with many new friends (and a bunch of swag).

SCALE: Will you also be talking about other open source game consoles, not just your own project? Awesome as it may be.

Guillermo: I will! I plan on talking about the OUYA, UZEBOX and GP2X.

SCALE: How would you compare the Marshmallow game console to these other open source game console?  Will we see games from those consoles running on Marshmallow and vice-a-versa?

Guillermo: The MES falls in between the OUYA and the GP2X, the base system won't require soldering and since it's based on the Raspberry Pi, you can use it for other fun stuff after you're done gaming! Unfortunately, due to the way most of these systems work, you probably won't see games ported over to the MES, but the MES's game engine will fully support android soon, that means games written for the MES could be easily ported to the OUYA and other android devices.

Guillermo: I'll be manning the Marshmallow Game Engine booth. Please makes sure to drop in and say hello!

SCALE: Thanks for talking to us!