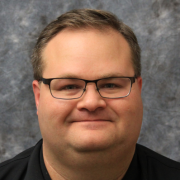 Lance Albertson is the Director for the Oregon State University Open Source Lab (OSUOSL) (http://osuosl.org) and has been involved with the Gentoo Linux (http://gentoo.org) project as a developer and package maintainer since 2003. Since joining the OSUOSL in 2007, Lance has managed all of the hosting activities that the OSL provides for nearly 160 high-profile open source projects. He was promoted to Director in 2013 after being the Lead Systems Administration and Architect since 2007. Prior to joining the OSUOSL, Lance was a UNIX Administrator for the Enterprise Server Technologies group at Kansas State University (http://ksu.edu). Lance prepared for life as a career systems administrator by grappling with natural systems first, joining his father near Hiawatha, Kansas on the family farm growing corn and soybeans. In his free time he helps organize Beaver BarCamp (http://beaverbarcamp.org) and plays trumpet