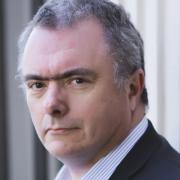 Dr. Paul Vixie is an Internet pioneer. Currently, he is the Chairman, Chief Executive Officer and Cofounder of award-winning Farsight Security, Inc. He was inducted into the Internet Hall of Fame in 2014 for work related to DNS. Dr. Vixie is a prolific author of open source Internet software including BIND, and many Internet standards documents concerning DNS and DNSSEC. In addition, he founded the first anti-spam company (MAPS, 1996), the first non-profit Internet infrastructure software company (ISC, 1994), and the first neutral and commercial Internet exchange (PAIX, 1991).
Dr. Vixie served on the ARIN Board of Trustees from 2005 to 2013, as ARIN Chairman in 2008 and 2009, and was a founding member of ICANN Root Server System Advisory Committee (RSSAC) and ICANN Security and Stability Advisory Committee (SSAC). He operated the ISC's F-Root name server for many years, and is a member of Cogent's C-Root team. He is a sysadmin for Op-Sec-Trust. He earned a Ph.D. from Keio University.