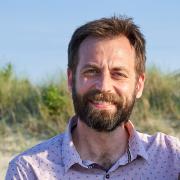 With the rise of chip-and-pin for in-person credit card transactions, online fraud has increased dramatically.  For Ticketmaster, this fraud manifests itself either through a fraudster opening a new account with a stolen credit card, or with a fraudster taking over an existing account and using the credit card on file to purchase a ticket and then transfer the ticket out of the Ticketmaster ecosystem.  This problem became so significant for Ticketmaster that an entire team of data scientists and engineers were dedicated to solving the problem and keep tickets in the hands of fans.  The models that the data scientists have rolled out into production require extensive open-source infrastructure to provide fraudulence scores for every transaction in real time.  This talk will describe that infrastructure in detail, including the extensive use of Kafka Streams, Spark, Terraform, Java, Python, and Kubernetes, as well as the packages used to build the model itself.