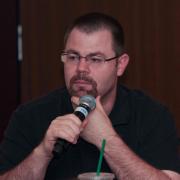 Joe Brockmeier says you can do one or the other: You can solve the package problem or make it worse. In fact, this SCALE veteran is giving a talk based on that exact topic -- Solving the Package Problem (or Making It Infinitely Worse?) -- on SCALE 13x Saturday at 1:30. The SCALE Team caught up with him to ask the either/or question.

A: Sure! A long, long time ago I discovered Linux in the form of the "Slackware 96" set. After a lot of struggling, I eventually kind of figured out what was up with this Linux stuff and started working for a company (LinuxMall.com) that sold all manner of things related to Linux: cheap Linux CDs, boxed sets, t-shirts, stuffed penguins, etc. (Yes, once upon a time people primarily got Linux off CDs by mail rather than bittorrenting ISOs...)

From there, I started writing about Linux for Linux Magazine and then a number of other publications and worked as a freelance writer for several years.

Since then I've worked for a hosting company doing support and system administration, for Novell as the openSUSE Community Manager, and with Citrix on Apache CloudStack. I'm a member of the Apache Software Foundation (ASF) and now work for Red Hat in the Open Source and Standards (OSAS) team.

Q: You're giving a talk on Solving the Package Problem (Or Making It Infinitely Worse?). Without tipping your hand on the actual talk, can you give us an idea of what we might expect?

A: Whether you're using Linux as on a laptop or desktop as a single-user system, or you're administering 10,000 systems in a production environment, or you're a developer trying to put your application on systems - how Linux apps are packaged and deployed is of interest to you.

I'm going to talk a bit about the history of Linux packaging, the current state of packaging, and then how traditional systems mesh with containers and language-specific packaging / deployment tools like Ruby Gems or Perl's CPAN. Will also be looking at next-generation tools like OSTree and Docker/Kubernetes.

A: Heck no, I've been coming to SCALE for years and years. I think my first SCALE was in 2006 and have only missed one or two since. SCALE is well-organized, has great content, a very fun crowd, and is one of my favorite events year after year.

A: Make sure to show up Friday for Infrastructure.Next! We'll have a lot of great talks and you'll learn a great deal about the future of the open source data center.